The AquaSep Plus L/L Coalescer system effectively separates water from petroleum products and chemicals. Entrained water in liquid hydrocarbons and chemicals can be a problem. This is particularly true for fuels that contain high concentrations of surfactants which are readily present in hydrocarbons and chemicals (see below). Surfactants make water removal difficult for conventional liquid/liquid coalescers and other water separation equipment because they lower the interfacial tension between the water and the continuous phase fluid.

The same problem can occur when attempting to separate oil from water. The presence of surfactants also leads to disarming of the coalescer. Pall’s AquaSep Plus coalescer will efficiently separate water from a hydrocarbon stream without disarming.

Common Sources of Surfactants in Hydrocarbon and Chemical Processes

The Pall AquaSep Plus coalescer is a multiple stage system. It first removes particulate matter, then coalesces and separates the dispersed phase liquid from the continuous phase liquid.

For removal of water from hydrocarbons, the AquaSep Plus coalescer will remove entrained water to a level of below 15 ppmv over a wide range of conditions:

For removal of oil from water, the AquaSep Plus coalescer will remove free oil from water over a wide range of conditions in the horizontal configuration.

To maximize the service life of AquaSep Plus coalescers, each coalescer is constructed with an integral prefilter.

Stage 2: Coalescence
The hydrocarbon and water mixture enters the coalescing element and flows inside to outside (see Figure 1). This is where small droplets of dispersed phase liquid come together, or coalesce, as the mixture moves through the depth of Pall’s specially formulated coalescer medium.

In separating water from fuel, water-free fuel and large water droplets flow toward the separator located directly below the coalescer stage. Flow is outside to inside (see Figure 1). The separator medium is hydrophobic, which prevents water from entering the separator. Only waterfree fuel flows through the separator. Water and fuel are removed by separate drain connections.

In separating oil from water, a settling zone is designed downstream of the coalescer. In the settling zone, the large coalescer droplets are separated due to gravity (see Figure 2).

Benefits of the AquaSep Plus L/L Coalescer

Does Not Disarm; Increases Service Life
Pall’s specially formulated medium coalescer contains no glass fiber and does not disarm in the presence of surfactants. This results in longer service life than conventional coalescers. The prefilter stage removes particulates and also extends the filter service life.

Fluid Compatibility
Pall’s AquaSep Plus liquid/liquid coalescer is compatible with refined products including: 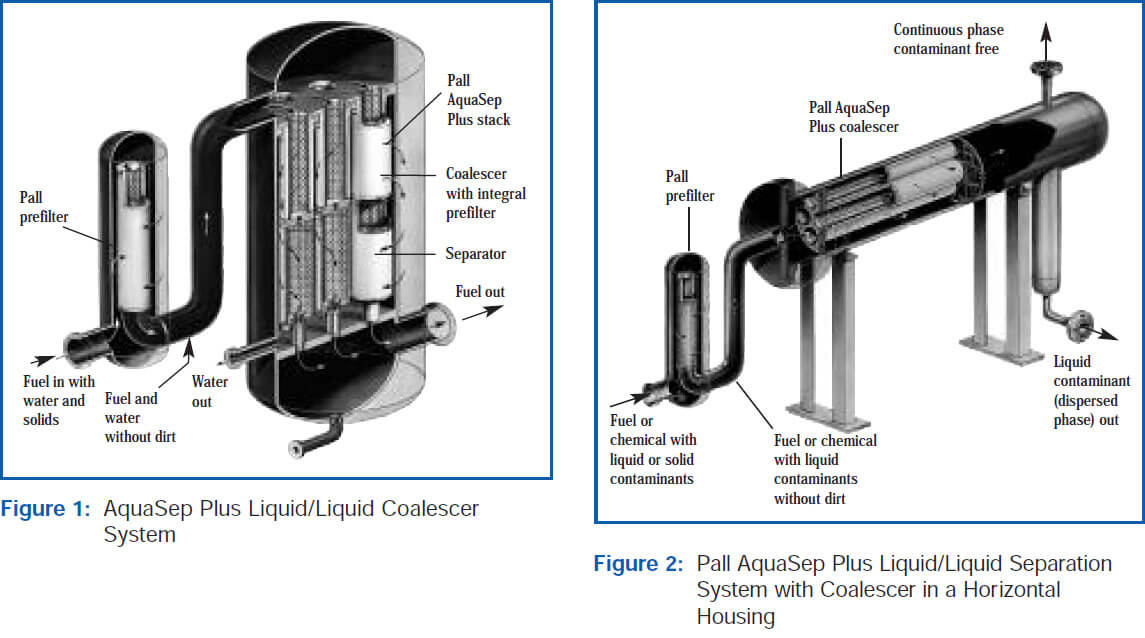 One of the biggest operational problems for conventional liquid/liquid coalescers is disarming. When a liquid/liquid coalescer is performing efficiently, water molecules bond with components on the glass fiber called a silenol functional group. The water molecules that collect on the glass fiber coalesce with incoming water molecules to form a large droplet, which will eventually become heavy enough to drain from the coalescer. In an efficiently operating coalescer, once a droplet has fallen from an active site, the coalescing process repeats (see Figure 3).

Disarming occurs when surfactants bond with the silenol group. The silenol group has a greater affinity for surfactant molecules than for water molecules. As the surfactant molecules bond to the glass fibers, the water molecules pass quickly through the medium (see Figure 4). This greatly reduces water removal efficiency, increasing the probability of a product quality problem, and short coalescer service life, which, in turn, results in frequent changeout and increased disposal costs of coalescer filter elements. 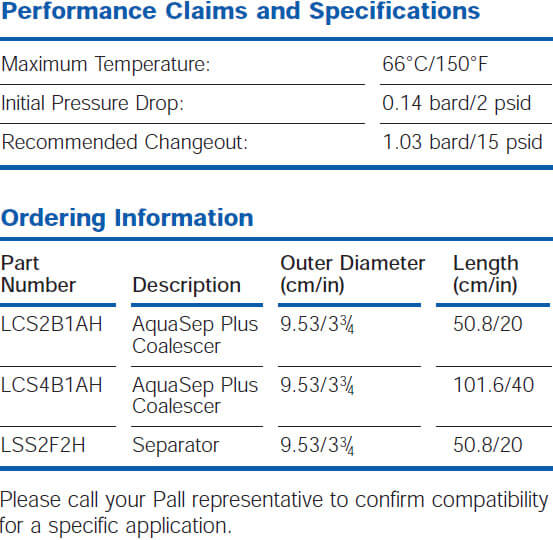 Get in Touch
↑
Product Inquiry
×
SEND